Dental Information About Procedures and Choices 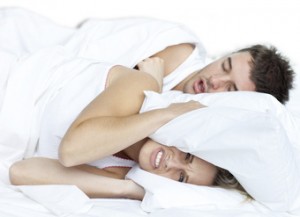 Snoring can ruin a relationship.   It’s embarrassing for the soccer mom whose daughter plays travel soccer and shares a hotel room with another mom or the dad who falls asleep and snores loudly at the school play.    Worse, snoring can be a symptom of a potentially life-threatening medical condition known as Obstructive Sleep Apnea.   Our bodies need sleep to rest and recover from our daily activities.  Without proper sleep, we lack concentration during the day and suffer the loss of cognitive memory function that occurs only during normal sleep cycles.  Poor sleep places a strain on our bodies, exacerbates disease, and slows the healing process.   Once misunderstood and underdiagnosed, sleep apnea has been associated with high blood pressure, heart attack, stroke, diabetes, acid reflux, and fibromyalgia, to name just a few of the medical maladies associated with poor sleep.

Snoring is the sounds made when tissues of the tongue, soft palate, and throat become partially blocked and vibrate during breathing.   Studies estimate 40% of the adult population snore by the age of 40.  Being overweight, some medications, alcohol consumption, and simply the size and shape of the tissues in our mouths and throat are just a few of the common causes of snoring.  All contribute to the constriction of airflow during breathing, resulting in the noises we call snoring.   Snoring isn’t necessarily dangerous but can be a precursor or warning sign of a serious medical condition known as Obstructive Sleep Apnea (OSA).

What is Sleep Apnea? 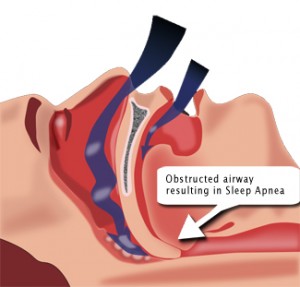 Unlike snoring, where a partially blocked airway causes vibration, tissues of the tongue, soft palate, and throat can actually block the air passage.  Sleep Apnea is a breathing disorder described as the disruption of airflow caused by the blockage of one’s airway.   The word Greek word “apnea” means “want of breath.”   Obstructive Sleep Apnea (OSA) is a medical condition where the blocked airway passages actually prevent breathing.   A person diagnosed with even mild to moderate Sleep Apnea stops breathing 5-30 times per hour!

What are the Signs and Symptoms of Sleep Apnea?

A person with Sleep Apnea may stop breathing upwards of 100 times per hour.   As your brain senses the decrease in oxygen levels caused by breathing cessation, your body awakens you for a brief instant to breathe.   The awakening period is so short, one does not remember, and the cycle of obstruction, lack of breathing, and awakening repeatedly continues throughout the night.   Bed partners of apnea individuals describe a cycle of loud snoring, silence associated with the complete cessation of breathing, and then a violent gasping for breath.

Sleep Apnea effects range from bothersome to life-threatening.     As we are constantly awakened to breathe, our body never enjoys “a good night’s sleep” that we require to function normally in our daily lives.  We sleep, so our bodies quite literally recover and heal from daily activities.   Without proper sleep, we lose the ability to concentrate and retain memory in school and the workplace.   Sleep apnea signs and symptoms include irritability, morning headaches, lack of concentration, learning and memory disorders, and sexual dysfunction.  Falling asleep during a business meeting or behind the wheel of a car is not normal!

Sleep Apnea is believed to exacerbate many other medical conditions such as high blood pressure, heart attack, and stroke.   Remember, sleep apnea is the cessation of breathing followed by violent awakening and gasping for breath.    Severe bruxism (grinding of the teeth) and gastric reflux are associated with sleep apnea.   Why would someone die in their sleep of a heart attack or suffer a stroke when it should be the quietest and stress-free time for our bodies?   The Department of Transportation screens all commercial truck drivers for sleep problems, as studies indicate up to 4% of all traffic fatalities are related to sleep apnea.    The Exxon Valdez oil spill and Space Shuttle Challenger disaster were partly attributed to poor decision-making associated with poor sleep.

How can we help?

The American Academy of Sleep Medicine provides physicians with evidence-based recommendations for evaluating and managing patients with sleep disorders based upon the latest medical research.   This physician-based organization’s Practice Parameters includes oral appliances as a treatment modality for mild to moderate Obstructive Sleep Apnea or for patients who are CPAP mask (Continuous Positive Airway Pressure) intolerant and diagnosed with severe Sleep Apnea.

We at Greenwich Sleep Apnea want you to be knowledgeable in the decision process making about the treatment choices for sleep apnea.   Working in conjunction with local physicians trained in Sleep Medicine, the team can discuss a diagnosis as to the severity of the condition and treatment options with you.   Several FDA-approved dental devices help position the jaw at night and are proven to treat obstructive sleep apnea successfully.

Because Obstructive Sleep Apnea (OSA) is a medical condition diagnosed by a physician trained in sleep disorders, many medical insurances provide coverage for devices fabricated by your dentist.   As a dentist, we see this as a wonderful benefit as it preserves your dental insurance for dental care.

Please call us so we can begin to discuss your concerns as well as provide options for care.  Don’t let a health condition estimated to afflict one in five adults over the age of forty go untreated.